Light-emitting diodes (LEDs) are widely used electronic components, but due to their low luminous efficiency and brightness, and the variety of luminescent colors, LEDs were mainly used in instrumentation status, numbers and texts before the 1990s. The display of etc. In the early 1990s, LED chip manufacturing technology and packaging technology achieved significant development. The brightness of LEDs reached cd level, resulting in so-called high-brightness LEDs. The color of the light also covered the entire visible light spectrum, greatly expanding the LED's Application scope and field. Many countries and regions in the world have begun to replace incandescent lamps and metal tungsten halogen lamps with ultra-high-brightness LEDs. They are widely used as traffic lights, warning lights, sign lights, high-position brake lights, tail lights, turn signals and instrument panels on automobiles and cars. Lighting and display, etc. Some foreign companies have also produced LED bulbs, LED desk lamps and small flashlights. So far, the luminous efficiency of white LEDs has reached 15 to 20 lm/W, which is equivalent to or higher than that of incandescent lamps. It has become possible to replace incandescent lamps with LEDs.

Compared with incandescent lamps, LED solid lamps have a long service life (up to 100 000 h), low energy consumption, high luminous efficiency, environmentally friendly, low maintenance costs, stable operation, etc. Lighting source. Since the luminous flux of a single LED tube is relatively small, it is necessary to obtain a plurality of LED tubes to obtain an illuminance equivalent to an incandescent lamp or a fluorescent lamp, so the cost of LED solid lighting is relatively high. At present, solid-state lighting has not been fully developed, and the main factors that restrict the development of LED lighting are the brightness and development cost of LEDs. With the development of LED manufacturing technology and the continuous reduction of cost, LED lighting will become more and more popular. High-brightness LEDs have a broad development prospect and market for solid-state lighting.

A method of adjusting two or more colors to be visually identical to a certain color is called color matching. The colors can be mixed with each other. This mixing can be a mixture of color light or a mixture of dyes, and the results obtained by the two mixing methods are different. The former is called color addition and mixing, and the latter is color subtraction and mixing. The light of several colors stimulates the human visual organ at the same time or sequentially, and a new color feeling different from the original color is produced, which is a method of adding and mixing colors. Experiments have shown that it is most convenient to produce other colors with the three primary colors of red, green and blue. These three colors are the optimal three primary colors.

If (C) represents the unit of the color to be matched, (R), (G), (B) represent the units of the three primary colors of red, green, and blue that produce mixed colors, respectively, R, G, B, and C represent red, The number of green, blue, and matched colors, when the color match is reached, there is

In colorimetry, the number of three primary colors that are often matched to the equal energy (referred to as equal energy) spectral color is called the spectral tristimulus value.

Representation. The color equation for matching the energy spectrum (CÎ») with a wavelength of Î» is

For spectral colors of different wavelengths, the tristimulus value is a function of wavelength.

It is said that the spectral tristimulus value is also called the color matching function, and its value depends on the visual characteristics of the human eye.

Under the color matching conditions that may have negative equations above, all colors, including various shades of white and black, various shades and saturation colors, can be produced by the additive blending of the three primary colors of red, green and blue ( match). 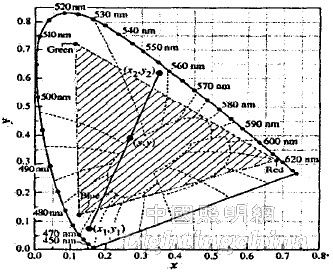 It is known from Greensman's law that mixing any two non-complementary colors in any ratio will produce an intermediate color. It is represented on the chromaticity diagram by mixing any two colors (including complementary colors), and the resulting color is the color on the connecting line segment with the two colors as the end points. The three linearly independent colors are mixed, and the resulting color is the color within the triangle surrounded by the three points, as shown in Figure 3.

The use of three-color LED color mixing is also based on this principle. The main task of color matching is to determine the ratio of the three primary colors, that is, to determine the tristimulus value, thereby further determining the ratio of the number of red, green, and blue L ED tubes. The color matching mentioned in the article mainly refers to matching white light, that is, when the red, green, and blue primary color LED tubes reach the brightest, the mixed light is the selected white light, which is called white balance.

Expressed in the form of a matrix

In the CIE-XYZ color system

By calculating the chromaticity coordinates of the color matching, the total light intensity or the light-to-light ratio of the red, green and blue LED light-emitting tubes can be known from the unit of the chromaticity system, and various characteristic parameters of each light-emitting tube can be determined. The approximate number of LED tubes.