With the continuous development and application of electronic technology in the automotive field, more and more automotive components are beginning to adopt electronic control. Since electronic systems rely solely on electrical signals, automobiles require sensors to convert various optical, chemical, and mechanical excitations into electrical signals. These sensors work reliably in harsh environments with extreme temperatures, humidity, shock, vibration and electromagnetic interference. Of course, these extreme operating conditions can significantly shorten the life of the corresponding conventional sensors. The sensors we use in automobiles are called car sensors.

Modern cars use a wide variety of sensors. According to the function of the car sensor, it can be classified into sensors that measure functions such as temperature, pressure, flow, position, gas concentration, speed, brightness, dryness, and distance. They perform their duties. Once a sensor fails, the corresponding device Work will not work properly or even work. Therefore, the role of the sensor in the car is very important (the application of automotive sensors).

The figure below shows: 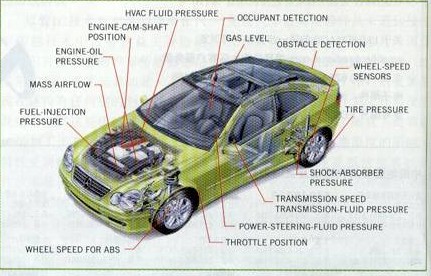 The function and location of the sensor on the car

The matrix of Table 1 lists several measured parameter values â€‹â€‹and the techniques (sensor types) that are commonly used to measure these parameters. However, this matrix is â€‹â€‹not comprehensive. For example, it does not include a flow sensor or a sensor that detects specific chemical components and elements such as O2. Chemical sensors are key components in automotive emission control systems. 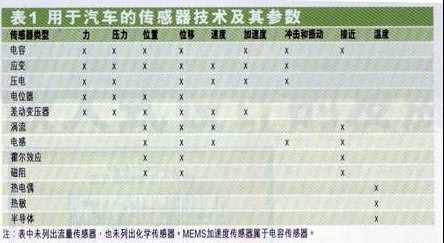 Sensor technology and parameters for automobiles

According to the different functions of the sensor and the position of the vehicle in the body, Xiaobian mainly introduces the following types of automotive sensors.

Its function is to detect the amount of intake air of the engine, and convert the intake air amount information into an electrical signal output, and transmit it to the ECU. We know that the driving of the car requires the ignition of the ignition device to get the forward impulse. Therefore, the amount of the inflation is the basis for the ECU to calculate the injection time, the fuel injection amount and the ignition timing of the ignition device when the vehicle is ignited. Its role is to allow us to better accelerate and decelerate the car.

Next to the brake piston (the caliper of the brake disc, the brake piston inside), the ABS work is to ensure that the brake piston and brake disc are not stuck, to ensure that they are on the edge of sliding friction and static friction. Most of them are monitored by an inductive sensor. The abs sensor outputs a set of quasi-sinusoidal AC signals through the action of a ring gear that rotates synchronously with the wheel. The frequency and amplitude are related to the wheel speed. The output signal is transmitted to the ABS electronic control unit (ECU). ), real-time monitoring of wheel speed.

In the sensor above the differential or the half shaft, to sense the number of turns, generally use Hall, photoelectric two ways to detect the signal, the purpose of which uses the odometer count to effectively analyze the speed and mileage of the car. Since the angular velocities of the half shaft and the wheel are equal, the radius of the known tire is calculated directly from the history parameters. Designing two bearings on the drive shaft greatly reduces the force distance during operation, reduces the friction and enhances the service life; from the original dynamic detection signal to the gear running detection signal; from the original in-line vertical transmission Change to chamfered interface gearbox. The odometer sensor plug is usually on the gearbox, some open the engine cover to see, and some to operate in the trench.

A protective sensor, or safety sensor, is used to prevent the front impact sensor from short-circuiting and causing the airbag to be accidentally opened. Its signal is used by the computer to determine whether a collision has occurred. When the connector terminal connected to the SRS computer is short-circuited, the contactor is not closed due to the action of the protection sensor, so that the airbag circuit is always disconnected, thereby preventing the airbag from being accidentally exploded. In general, the inertial force or deceleration value required for the action of the guard sensor is greater than the inertia force or deceleration value required for the action of the front impact sensor. When the guard sensor is actuated, the power circuit of the SRS igniter is turned on. Detonate the airbag.

It refers to a micro-electromechanical system that integrates micro-sensors, actuators, and signal processing and control circuits, interface circuits, communications, and power supplies. Commonly used are silicon piezoresistive and silicon capacitors, both of which are micromachined electronic sensors generated on silicon wafers. In general, we use the oil pressure sensor to detect how much gasoline the car's oil is inward, and convert the detected signal into a signal we can understand, remind us how much gasoline we have, or how far we can go. Even reminding the car to add gasoline.

One of the characteristics of modern automotive technology development is the addition of advanced functions, which are all based on electronic control, such as stability control and electronic throttle control. This has led to an increase in the electronic content of automobiles. Sensors are one of the indispensable devices in automotive electronics applications, and the sensors we use in automobiles are called automotive sensors. This article focuses on the basics of sensors used in different locations of vehicles and different types of automotive sensors.

This Automation curtain is specially designed for automation industry. SDKELI LSC2 light curtain is designed for automation field, with small size, compact structure and strong anti-interference ability, and the product meets IEC 61496-2 standards. The Automatic Light Curtain is with reliable quality and very competitive price. It has been used in many factories and has replaced curtains from Sick, Omron, Banner, Keyence, etc.